Are we gradually falling into an economic, environmental and moral spiral? More frequent acts of terrorism, shrinking ice caps, racial and ethnic violence, the list goes on. While on the one hand, one could easily make a doomsday argument, if we look at one of the most fundamental forces driving how we relate to each other, there’s cause for optimism.

Millions upon millions of individuals from almost every walk of life are increasingly making conscientious, value-driven decisions about what to buy. Collectively, these everyday purchases are exerting a significant force on our economy.

To see if this idea holds water, at least in the U.S., I created a survey on Google and asked people of all ages, from all regions of the U.S.: would you pay more for something from a company that takes action on an issue you care about?

Believe in what you buy 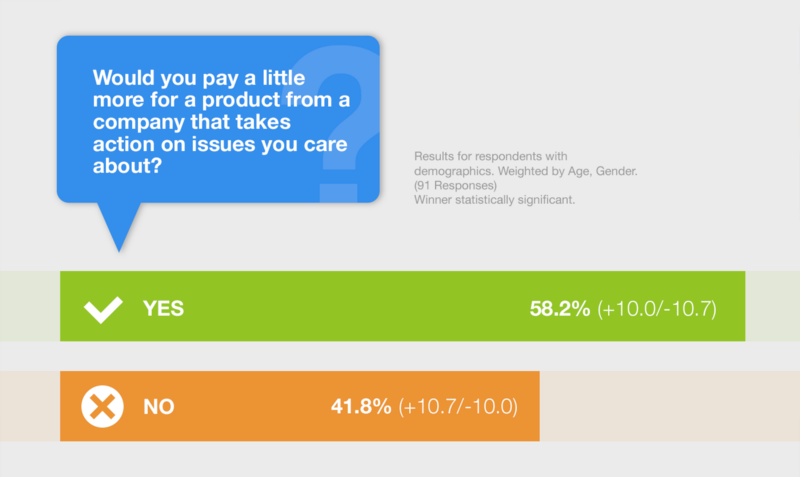 In fact, after less than 100 people took the survey, Google claimed the survey had achieved statistical significance. While the majority is not everyone, it confirms that a whole lot of people are buying (or claiming to buy) with their conscience.

Another recent survey conducted by Deloitte found a similar sentiment that goes even deeper. Out of 1,000 millennials, Deloitte found that over half believe business will have a greater impact than anyone else in solving society’s biggest challenges of the future.

Why are people buying with purpose?

How did we get to this point? Memories of summer nights in my teens conjure up smells of the mall. My friends and I never thought much about what we bought: one day it was flavored lip gloss (root beer was my favorite), then next flip flops.

Imagine how different things must have been much further back, in the early days of the marketplace when human beings first began to exchange goods. Buyers likely only purchased things they needed: food, items for basic shelter, and you’re done. Let’s call it the economy of need.

Then, as people began to acquire excess capital, they were able to buy more stuff. In 1928, Paul Mazur was quoted in the Harvard Business Review as saying, “We must shift America from a needs to a desires culture. People must be trained to desire, to want new things, even before the old have been entirely consumed.” Buyers began to consume without much thought to how stuff impacts their lives and the world around them. And so we moved into the economy of desire.

Over the last few decades, however, the ethos behind this economy of desire has been shifting. Much like Maslow’s hierarchy of needs, our economy is moving up a hierarchy of shopping. We’re moving towards a purpose economy, where people are driven towards experiences that are more responsible towards others, the environment, and themselves. 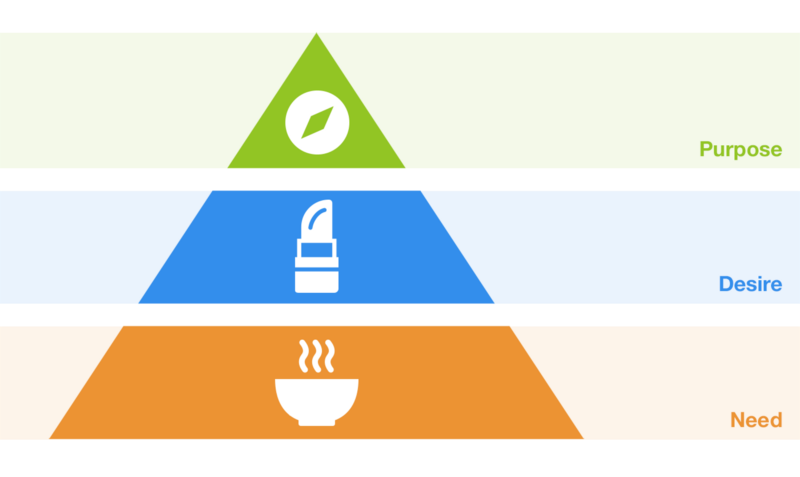 So what exactly is the purpose economy? It’s not as if we all walk around with smiles of loves on our faces, handing out gifts of gratitude to each other.

Rather, the purpose economy takes place at the intersection between me and you, in that tenuous space where multiple desires are experimentally held together — sometimes harmoniously, creating peace, even bliss, and sometimes, well, things go awry.

We buy things we want, to be sure, we have not evolved into puritanical creatures; but we like it when these things and the ways they are made align with our higher values.

Take, for example, Chipotle, the most successful fast food company to emerge in the last few decades, topping the charts of favorite restaurants among millenials. Chipotle essentially reinvented the concept of fast food with a forward-thinking value proposition of “food with integrity.”

Or, the emergence of social entrepreneurship, with large players like Tom’s and Warby Parker who not only offer great products, but give back to the community with every purchase.

And look at the explosion of crowdfunding sites, like Kickstarter and Indiegogo, where people spend money to help others, often obtaining “gifts” for themselves along the way. A quintessential example of the purpose economy is GoFundMe, a for-profit crowdsourcing fundraising site. People spend over $100 million a month donating to people who in need. And in a true merging of ethics and business, the founders sold their majority stakes of the company on a valuation of over $600 million.

The purpose economy is more than just consumerism with conscience; it takes place at another intersection as well — somewhere between short-term pleasure and long-term achievement, driven by the ambition to achieve something meaningful.

If we think about what are arguably the top 2 brands among millennials, Nike and Apple, both share a mission to inspire people to become better versions of themselves, one focused on the mind, the other on the body. Sure, there is an element of status and cool that motivates these purchases; but at heart, both these companies owe much of their success to the fact that they sell inspiration and the tools to help us achieve our goals.

It’s not that the purpose economy has overtaken, or will overtake the economy of desire or need. The three economies operate simultaneously, often overlapping, sometimes colliding. If we could track each economy, a graph like this would be more appropriate than a pyramid, with the growth curve of the purpose economy the sharpest. 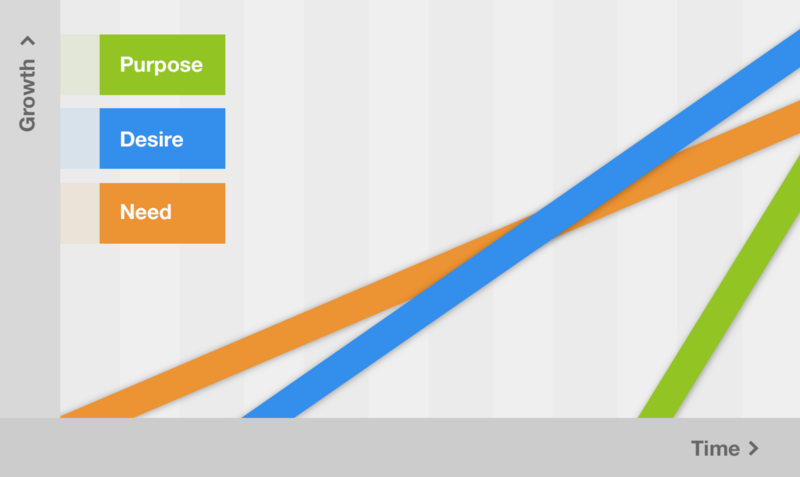 So while it may seem that the moral fabric of our world is deteriorating, there’s a quiet, powerful revolution happening at the corner store and the e-commerce site alike. Here’s the thing… we participate in the purpose economy because it helps us to feel connected to something more important, more lasting, and more rewarding than our everyday struggles. Much like a teenager who outgrows the thrill of wearing lip gloss, the economy seems to be outgrowing the thrill of desire.

And that’s something to hang our hopes… and our businesses… on.

Here’s to gifts of wisdom, love and delight